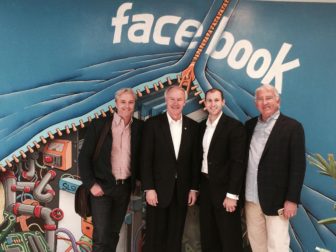 HOT SPRINGS, AR–  Governor Asa Hutchinson today announced the details of an agreement with Facebook, Inc. to expand the company’s Techstart program to all Arkansas public high schools. The Arkansas & Facebook Techstart Partnership was a first-of-its-kind partnership with the social media giant. Under the original agreement announced earlier this year, Facebook donated approximately 400 Virtual Reality (VR) classroom kits, including computers, cameras and the Oculus Rift equipment necessary to administer the Techstart program to approximately 250 schools. This new agreement will expand the donation to all of the more than 360 public high schools in Arkansas. In addition, each school will receive an Oculus Rift touch controller and 30 virtual reality viewers.
“Last year, after taking notice of Arkansas’ nation-leading computer science initiative, Facebook generously donated hundreds of Oculus VR kits to various high schools around the state,” said Governor Hutchinson. “Now Facebook has agreed to expand the program and will provide an Oculus VR kit and additional technology to every high school in the state.
“We are appreciative to Facebook for its continued efforts to generate excitement for STEM fields in Arkansas high schools. Facebook’s generous donation will provide Arkansas’ students with an exciting learning platform that will allow them to have fun while sharpening their computer science skills and exploring STEM careers. Students who utilize this incredible platform will be well-positioned to succeed in our increasingly technology driven economy.”
Techstart is a program developed by Facebook, Inc. that aims to give students access to high-quality computer science and virtual reality education in order to generate interest in computer science careers and provide instruction for students. Techstart uses a combination of virtual reality instruction, curriculum support and professional development for educators; access to computer science events; and connections to engineering mentors to provide a powerful tool for students.
According to the agreement, Facebook’s final donation will include more than 550 VR kits, and distribution and facilitation of these resources will be administered through the Arkansas Department of Education Computer Science Division and the Arkansas Public Resource Center. Facebook’s financial commitment to the #ARKidsCanCode Initiative will be in excess of $1.3 million.